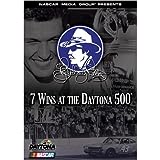 Richard Petty may be the most recognizable name in NASCAR history, and one of the greatest racers in the history of motor sports. Over four decades behind the wheel know as “The King” won an unparalleled 200 races. He won a record 7 Cup Titles. And he won the sport’s greatest race, The Daytona 500, 7 times- In 1964, ’66, ’71, ’73, ’74, ’79 and ’81.Victory in the Daytona 500 defines NASCAR greatness. And Richard Petty defined greatness in the Daytona 500. His first victory can in 1964-The same year he won his first Championship. In 1971, his third Daytona 500 victory was more than any driver in NASCAR history. He won back-to-back 500s in 1973 and 1974. He closed out the seventies by winning what’s considered to be the greatest NASCAR race of all time. The 1979 Daytona 500 and in 1981, he treated his sport to one more immortal moment, winning the “Great American Race” for the seventh time. For the first time, the NASCAR vaults have been opened so race fans can relive each of Richard Petty’s Seven Daytona 500 victories, from the green flag to the checkered flag, all in one set: 7 wins at the Daytona 500. 3 Disc Set, 272 Minutes. Officially Licensed by NASCAR