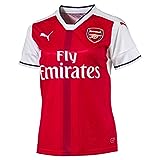 The brand new AFC Women’s 2016/17 Home SS Replica Kit is here. The renowned red body and white sleeve design uses PUMA dryCELL fabric to wick away moisture from the skins surface. Whether your cheering from the stands, at home, or playing in your own 5 a side friendly show your Gunners pride. The classic Gunners shirt has an added blue trimmed collar and sleeves, with dark red stripe running down the centre if the shirt. The Arsenal Crest sits on the left chest so you can cheer on your team with pride. The lightweight and durable polyester means you can train till dusk with underarm mesh gusset for optimal ventilation. – PUMA DryCELL fabric for ultimate moisture management – Woven Arsenal Crest – Underarm mesh gusset – PUMA Cat logo – 100% Polyester