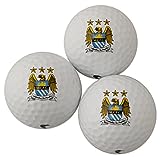 Any golfer that is also a football fan will be pleased to receive these printed Manchester City FC golf balls. Manchester City FC play their football in the English premier league and was founded in 1880. They had a several different names before coming Manchester City FC in 1894. After several years in decline Manchester City FC has seen a recent revival in fortune after becoming one of the richest clubs in the world after they were purchased by the Abu Dhabi Group.