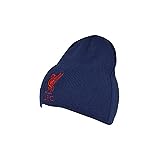 Keep your head warm while also advertising who is your favourite team with this navy knitted cuffed Liverpool FC beanie hat. Liverpool FC is based in Liverpool and play their football in the Premier League. Liverpool FC is one of the most successful football clubs in Europe. Liverpool FC was founded in 1892 and has long standing rivalries with Everton FC and Manchester United FC. Liverpool FC plays its home games at Anfield in a red strip.